The following information was submitted by Barb Auping

As early as 1839 a group of dedicated German Saxon Lutherans settled in St. Louis and Perry County, Mo.  In that same year another group of Lutherans from Melle, Germany, in the old kingdom of Hanover, drifted into St. Charles County, settled here, and named the settlement New Melle.

These were middle class immigrants who cultivated their own land, who had been small village shop keepers and artisans, and who also were somewhat skilled in carpentry and masonry. They were hard working, self-sufficient people and deeply religious.

In 1844 the German Evangelical Lutheran Congregation of New Melle bought 40 acres of land. In 1850, 20 of the 40 acres were set aside for a “Marketplatz” (later referred to as Market Square) in the center.

The layout was a rectangle, approximately 700 feet by 1300 feet. Property lines were marked off consecutively from 1 – 16, with an unnumbered rectangular section in the center, 200 feet by 400 feet, known as Market Square.

The Market Square included a Mill Pond, the John H. Kessler home, and his business establishment consisting of a wagon making shop, a tin shop and a blacksmith shop.
Starting in the early 1870’s and continuing through the 1920’s, New Melle progressed steadily forward to the point where it had three well- stocked general stores, a branch post office, a bank, a hotel, a tailor and barber, a hat shop, a tinnier, a harness shop, blacksmith shops, a cooper maker (wooden, staved vessels/barrels), meat market, a hackney (horse drawn vehicle) service and even a brick factory.

There was a winery and saloon and to counteract these there was a doctor and four churches. Operating also was a creamery mill, soft drink parlor and a garage. Through the years there have been other businesses.

For more about the community celebration on Sept. 14th, click here. 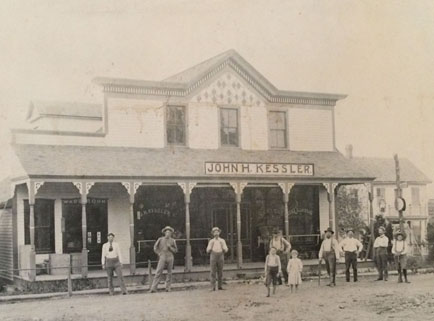 The John Kessler Store, located in Market Square on Mill Street, was built
in 1871 and expanded in 1889. It was destroyed by fire in 1977. 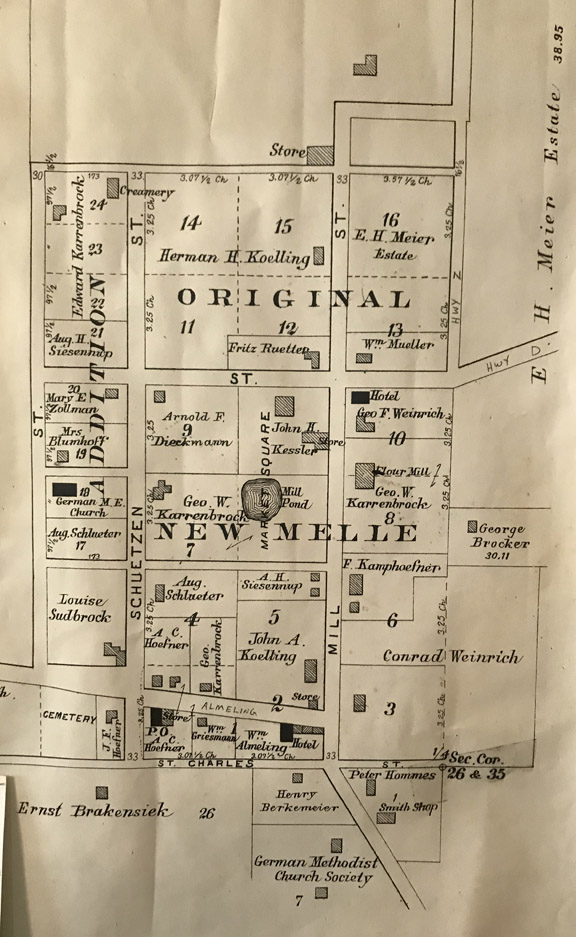 An early plat of New Melle.